Today, March 4th, 2018, marks the 50th Anniversary of the premiere of Franco Zeffirelli’s 1968 film”Romeo and Juliet” at London’s Odeon theater.

With a host of talented actors, rich period costumes and lush cinematography, this gorgeous movie is arguably the best ever adaptation of Shakespeare’s play.  Famous critic Roger Ebert included it in his list of ‘Top 100 Films’. Ebert wrote, “I believe Franco Zeffirelli’s Romeo and Juliet is the most exciting film of Shakespeare ever made.”

The movie won a Golden Globe Award for Best English Language Foreign Film.  It won Academy Awards for Best Cinematography (Pasqualino De Santis) and Best Costume Design (Danilo Donati).  It was also nominated for Best Director and Best Picture, making it the last Shakespearean film to be nominated for Best Picture to date. Coincidentally, the anniversary of its London premiere just happens to fall on the same day as this year’s Academy Awards presentation. This movie is unique in may ways. Director Zeffirelli had the innovative idea of using  teenage actors for the roles of the star-crossed lovers.  This was the first time in the history of the play’s performances that actual teenagers were cast to play the teenage roles. Olivia Hussey played Juliet and Leonard Whiting played Romeo.

Hussey and Whiting both received Golden Globes for ‘Best New Stars of the Year’.

Zeffirelli also chose unique historical locations, adding to the rich authenticity of the movie, which was set in 14th century Renaissance Italy.  These locations included:

The Palazzo Borghese, which was used for the famous ‘balcony scene’. The Palazzo was built by Cardinal Scipione Borghese in the 16th century. It is located in Artena, 20 miles south of Rome.

“But soft! What light through yonder window breaks? It is the East, and Juliet is the sun!” 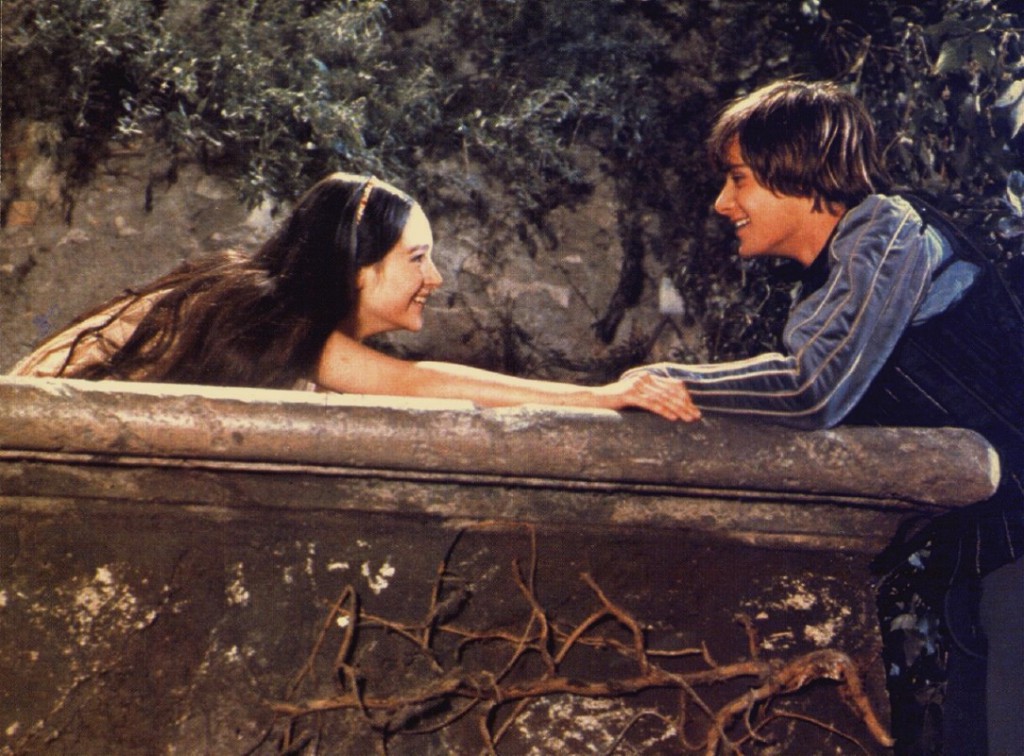 The interior church scenes (where Romeo and Juliet are wed) were filmed at a Romanesque church named St. Pietro Somaldi in Lucca, Tuscania, 50 miles northwest of Rome.

“For by your leaves you will not stay alone, till Holy Church incorporate two as one.” The tomb scene (where both lovers commit suicide) was also filmed in Tuscania.

“O happy dagger, this is thy sheath. There rust and let me die.” The Palazzo Piccolomini, built in 1460 by Pope Pius II, served as Capulet’s magnificent palace. It is located in Pienza, Siena province.

“His name is Romeo, a Montague, the only son of your great enemy.”

The dueling scenes  were filmed  in the old Umbrian town of Gubbio.

“A plague on both your houses!” Many readers of R & J have wondered the same thing. Young love can be messy.

If you have not yet seen this phenomenal movie, I suggest you rent or stream it at once!

And finally, in honor of the 1968 London Premiere, here is a youtube compilation where Queen Elizabeth herself greets the young stars. Hope you like it!