The women of the Owens family are under a curse. A terrible, inescapable curse of the worst possible kind. It goes as follows: Any man who falls in love with one of them will, through some unexpected accident or unforeseen circumstance, end up dead.

The curse began some 300 years ago in colonial Massachusetts when ancestor Maria Owens was condemned to death for witchcraft. She was put to the hangman’s noose but escaped through magic. Maria was then banished to a small island off the coast. She was pregnant,  and although her lover had promised to come for her, he never showed up. Maria vowed to never again deal with the messy heartbreak of love. That vow, it its weird twisted way, turned into a curse against all men who dared love an Owens woman.

Now, sisters Sally and Gillian had better watch out!  Of course, as luck would have it, both of them are going to fall in love. More than once.

Practical Magic, adapted from Alice Hoffman’s 1995 novel of the same name, is one of my favorite witch movies!  It stars Sandra Bullock and Nicole Kidman as the two sisters, who are orphaned after their parents die of curses and broken hearts. The girls are sent to live with their Aunts in the sleepy Massachusetts town where prejudice against witches still runs rampant.

Stockard Channing and Diane Weist are their wild and wacky aunts who eat chocolate cake for breakfast, cast love spells for the neighbors and dance naked in the moonlight.

As Sally and Gillian come of age in their Aunts’ glorious seaside mansion, they start to realize the true nature of their powers. Neither girl cares to practice magic.

Subdued, bookish Sally (Sandra Bullock) is the more gifted of the two, though she rarely casts a spell.  Wild child Gillian (Nicole Kidman) cares more for boys than witchery, and even runs away from her Aunts’ home to increase her opportunities with men.

The sisters are separated for a time, but, connected by blood and a psychic bond, they are never far apart.  Gillian gets involved with an abusive man named Jimmy Angelov.

One night, Sally gets a premonition that Gillian is in real trouble and immediately flies across the country to rescue her. She finds Gillian held hostage, but the forceful  Jimmy kidnaps both sisters.  An accidental overdose of belladonna, administered by Sally, sends Jimmy Angelov to sleep with the angels. Or in his case, the demons…   The sisters then find themselves in a tight spot; they are inadvertent murderers.

The detective may have a hard time arresting Sally when he realizes he is falling in love with her.

Practical Magic, released in 1998, is a fun, sometimes spooky, romantic comedy.  The movie recently made news headlines when co stars Bullock and Kidman showed up as presenters at this year’s Academy Awards. As the women reunited, Practical Magic fans conjured up the notion of them doing a sequel to the movie. 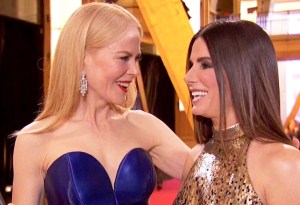 Whether or not this will happen remains to be seen, but one thing is certain; there will never be a shortage of fans hoping for it.

Throughout the movie, we find a number of spells and occult references. Here are some fun witchy facts:

It Runs in the Family

Sally and Gillian are descendants of Maria Owens who cast spells, broke hearts, and escaped the noose through magic. In reality, very few modern day witches can claim this kind of bloodline. Most witches are self made, through their own discipline and study of the Craft. There are, however, several families in  the Salem area who claim blood relations to those who were arrested for witchcraft in the 1692 witch hunts.

Atropo Belladonna is a poisonous plant. It has been used as a sedative and antispasmotic.  Large doses can be deadly.  In medieval Italy, young women put drops extracted from the plant into their eyes. This dilated their pupils, creating an effect that was considered to be beautiful – hence the name Belladonna, which in Italian means “beautiful woman”.

Yeah. Because nothing says sexy like the pie eyed opiate induced dummy stare 🙂

J.R.R. Tolkien fans might remember the character Belladonna Took Baggins. She was the wife of Bungo Baggins, lady of Bag End, and mother of the original ring bearing hobbit Bilbo Baggins.

The character Jimmy Angelov, played by Goran Visnjic, was supposed to be from Transylvania. We are not sure if he was an actual vampire, but his Romanian roots certainly lent an air of darkness and danger to him. In real life, Goran Visnjic is from Croatia. Close enough.

In the 1998 movie, a ten year old Evan Rachel Wood played Sally’s daughter Kylie.  Kylie took after her Aunt Gillian in both looks and temperament. We might wonder how she’d grow up…

Since then, Wood took on a bunch of noteworthy roles, including a vampire in True Blood.

When a frightened Gillian returns home with a bruised face after Jimmy has assaulted her, Aunt Frances, in typical witch fashion, suggests applying mugwort.  In Medieval Europe, mugwort was believed to be a magical herb that would protect against evil spirits, diseases and misfortunes.

While fans may be clamoring for a sequel after seeing Sandra and Nicole on the red carpet, author Alice Hoffman has actually written a prequel. This book, called The Rules of Magic, tells the story of the Aunts, Frances and Jet, when they lived as teenage witches in 1960’s New York City.  Read more here.

And finally, no review of Practical Magic would be complete without a visit to Midnight Margaritas! Watch as the Aunts stir up a powerful brew.  Grab some limes and enjoy the show 🙂