She is the mistress of the macabre, the weaver of witch tales, a native New Orleanian who may never have made her mark in the world if it weren’t for her near blood thirsty curiosity about what it would be like to interview a vampire.

We are only twenty seven days away from Halloween, and no countdown would be complete without a tribute to Anne Rice, my all-time favorite living author!

Luckily, today happens to be her birthday.  (I’m sure it is no coincidence that this woman came into the world so near to Halloween.)

Anne Rice was born on October 4, 1941 in New Orleans, Louisiana. She was the second of four daughters. Her parents, Howard and Katherine O’Brien, were of Irish Catholic descent. The family lived in the hard-scrabble, impoverished section of town known as the Irish Channel, where they rented a 3-room shotgun house. Most of Anne’s childhood was spent dealing with the hardships of poverty and her mother’s alcoholism.

Curiously, Anne is not her real name – her parents actually named her Howard, after her father.  Regarding her unusual name, Rice has said:

“My birth name is Howard Allen because apparently my mother thought it was a good idea to name me Howard. My father’s name was Howard, she wanted to name me after Howard, and she thought it was a very interesting thing to do. She was a bit of a Bohemian, a bit of mad woman, a bit of a genius, and a great deal of a great teacher. And she had the idea that naming a woman Howard was going to give that woman an unusual advantage in the world.”

In their defense, it is true that women with androgynous names sometimes do get certain advantages in life. This idea of boy-girl names for little girls became more popular in later decades. Consider Taylor, Beau, Ricki, Sammie, etc.  In the 1940’s, however, it must have been a pretty shocking thing to do.

Little Howard did not like her name at all. When she went to first grade at St. Alphonsus School, the nun asked her name and she replied. “Anne.”  It stuck. Her parents agreed to legally change her name in 1947.

New Orleans is a spooky and beautiful town, known for its ghosts and cemeteries. The dead are famously “buried above ground.” This is not so appalling as it may sound – it simply means that New Orleans adapted the French-Catholic custom of burying the dead in above ground in tombs and mausoleums, rather than underground coffins. 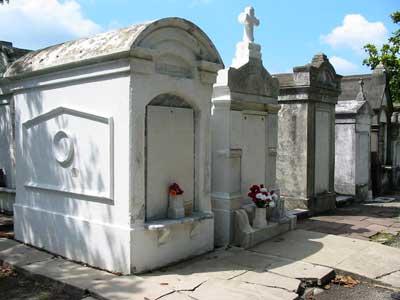 The cemeteries of New Orleans are legendary, hosting tales of folklore sure to fire any imagination. The Louisiana government takes no part in maintaining the tombs, so the upkeep of a deceased loved one is purely a family affair. This leads to a certain beauty – each tomb is personal, a work of art.

Here I am with my niece at St. Louis Cemetery #1 in the French Quarter.  In the tomb behind us lies none other than New Orleans voodoo queen Marie Laveau!

The O’Brien family lived right around the corner from Lafayette Cemetery #1. This was Anne’s childhood playground. It was in Lafayette that Anne would later place the tombs of her characters Lestat the vampire and the Mayfair witches.

Anne’s childhood was heavily influenced by her Catholic religion.  Black cloaks, dark confessional booths, rosary beads, candlelight vigils and marble statues that seemed to come to life were all part of her sensibilities. Not to mention symbolic blood drinking as designated by the sacraments.  Mix that with extreme poverty, family dysfunction,  cemeteries, voodoo, hoodoo, Mardi Gras – and we can easily see what fueled Anne’s wicked imagination.

When Anne was just fifteen years old, her mother died due to complications of alcoholism. Her father, unable to cope with four daughters, placed the girls in foster care at Saint Joseph’s Academy.  According to Anne, Saint Joseph’s was: “something out of Jane Eyre … a dilapidated, awful, medieval type of place. I really hated it and wanted to leave. I felt betrayed by my father.” Charles Dickens was Anne’s favorite author, and it seems her own childhood was a bit of a Victorian Bleak House.

Two years later, in 1958, Howard Rice retrieved his daughters and moved the family to Richardson, Texas. There, Anne met her future husband Stan Rice, while both were students at Richardson High School. Although Anne left Texas after high school and moved to San Francisco, she remained in touch with Stan.  While Anne was in California, Stan sent her a telegram asking her to marry him.  She said yes! The two were wed in Texas in 1961 when Anne was twenty and Stan was just eighteen. They were married for forty one years until Stan’s death in 2002.

While living in San Francisco in 1973, Anne wrote her first novel Interview With the Vampire.  She has stated that vampire literature was nearly nonexistent at the time, but she thought it would be “fun to interview one.”  The novel was published in 1976 and quickly became a best seller. Anne then wrote The Vampire Lestat and Queen of the Damned. The Vampire Chronicles had begun!

In 1988 Anne moved back to New Orleans with her husband and son, Christopher. Having become wealthy from her book sales, Anne purchased a mansion in the garden district. She then began writing The Witching Hour, the first of the Mayfair Witch Trilogy. The house that Anne lived in was located at 1239 First Street. It is the coolest house ever! It became as much a character in the books as the Mayfair witches themselves.

Here’s me in front of the magnificent house — a must-see if you are ever in NOLA!

In 2004, after the death of her husband, Anne moved back to California and has lived there ever since.

Interview With the Vampire was made into a movie in 1994. It starred Brad Pitt, Tom Cruise, Kiirsten Dunst and Antonio Banderas. The movie received critical acclaim. Three more of Anne’s novels were made into movies – Queen of the Damned, Exit To Eden and The Feast of All Saints.

For many years, Anne had given up film rights to her own novels, because movie studios had optioned them.  In 2015, Anne regained the rights and set about trying to turn the entire Vampire Chronicles into a television series. In 2017, Paramount Television and Anonymous Content optioned the rights to 11 books. The series was picked up for broadcast on Hulu, and should be premiering sometime in 2019. I can’t wait!