“From ghoulies and ghosties
And long-leggedy beasties
And things that go bump in the night,
Good Lord, deliver us.” – Scottish Prayer

Do you believe in Nessie, the legendary serpent that is said to dwell in the great loch of the Scottish Highlands? If so, you may owe your belief to an Irish monk known as Saint Columba, who is credited with its first sighting.

On this day, August 22, way back in 565, Columba was visiting Scotland, attempting to convert the Picts to Christianity.  It is said he was traveling near Inverness, on his way to see the King when, at the banks of the River Ness he encountered some of the locals burying a man.  Columba asked what had happened. The locals explained the man had swum out into the loch to retrieve his boat, which had come loose from its moorings. There, he was attacked by “a great beast” that dragged him underwater. The Picts, being warriors and not afraid to do battle, sailed out and attempted to rescue the victim.

But it was too late. The swimmer was already dead.

Columba was upset by the story and determined to stop the villainous beast.  According to biographies, Columba sent his follower, Luigne moccu Min, to swim across the river and try to retrieve the boat.  As one might suspect,  the serpent came out again and attempted to kill Luigne. However, Columba intervened, making the sign of the cross and ordering the monster to go away.

After that, Nessie never attacked anyone again.

However, he apparently still resides in Loch Ness. Several sightings of the monster have been reported since then.

In October 1871, a man named D. Mackenzie claimed to have seen “an object resembling a log or an upturned boat, wriggling and churning up the water”. The object moved slowly at first, then mysteriously disappeared.

In 1885, Roderick Matheson reported seeing a monster in the lake – “the biggest thing I ever saw in my life, with a neck like a horse and a mane.”

Interestingly, the water horse, or Kelpie, has always been a part of Scottish mythology. Kelpies are known to lure victims into the water where they drown and devour them. Kelpies are also able to shape-shift into humans, sometimes taking on “normal” lives upon dry land until they return to the lake, usually after having fooled or killed their human counterparts. Some folklorists think that Nessie is, in fact, a Kelpie. In 1888, Alexander Macdonald reported seeing a “salamander like” creature swimming in Loch Ness, and in 1895, Salmon Angler, a hotel keeper, described “a great horrible beastie”.  Perhaps it scared away his patrons?  In 1903, F. Fraser reported to have seen a beast with a “hump like and upturned boat” while out rowing. He also claimed that no matter how hard he rowed, he could not get closer to the beast. (Hard to imagine he would want to!)  In 1908, John Macleod claimed to have seen a creature that was “thirty to forty feet long, with a long tapering tail and an eel like head” lying in the water.

The Loch Ness Monster Official Website  reports over one hundred similar sightings. Several occurred in the 1920’s and 30’s, with another resurgence in the 1960’s. There have also been many in the 1990’s and early 2000’s.  The descriptions vary, some indicating the monster to have one hump, some as many as four humps, with a body as long as forty feet or as short as seven feet.

Could there be an entire family of Nessies, some small and some large?

Loch Ness itself is an unusual place. It is the largest body of fresh water in Great Britain. Some interesting facts:

Could this environment house a family of pre-historic dinosaurs? Maybe so!

According to the official website, twenty eight substantial photographs and film footage have been taken of Nessie.  One of the most interesting was taken in 1935 by Dr. MacRae, a retired physician. Reportedly, this film “clearly shows a creature with a long neck, a pointed head, narrow eyes, small horns on its head and the familiar 3 humps. Further sequences also show the monster splashing, turning and rolling in the waters while exposing a long scaly tail.” Dr. MacRae, now deceased, is said to have stored his film in a London bank vault, with explicit instructions stating that the footage could not be shown “until such time as the public takes such matters seriously”.

I think the world is ready for it! Release the film 🙂

The last sighting of Nessie reported on the website occurred in November of 2011, when George Edwards, a coast guard skipper, claimed to have observed a “slow moving hump” in the water. He took this picture, and stated:

“It was slowly moving up the loch towards Urquhart Castle and it was a dark grey colour.  It was quite a fair way from the boat, probably about half a mile away….I have friends in the USA who have friends in the military. They had my photo analysed and they have no doubt that I photographed an animate object in the water.”

Why has the world been so obsessed with Nessie? For hundreds of years he has lived in our folklore. It seems highly unlikely that so many people could have observed so many aspects of the Loch Ness monster without there being at least some truth to the stories.

What do you think of Nessie? 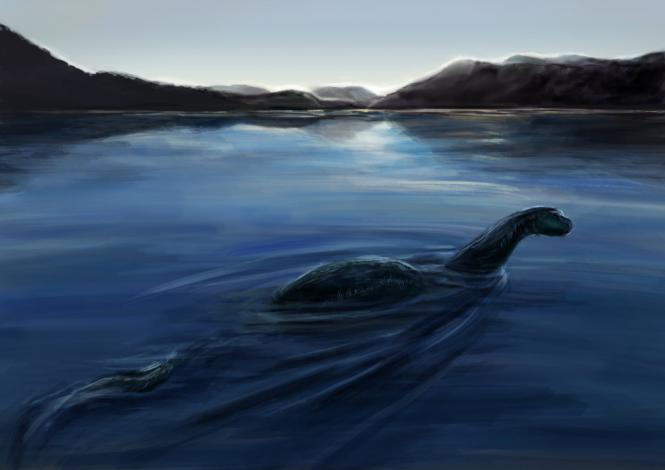 Many miles away there’s a shadow on the door
Of a cottage on the shore
Of a dark Scottish lake.” — From Synchronicity by Sting

And finally, this video shows a photo taken in 2016 by someone named Jimmy who claims to have seen the monster walking around in the fields near the loch. Hope you like it!