Imagination alone saves us from turmoil. 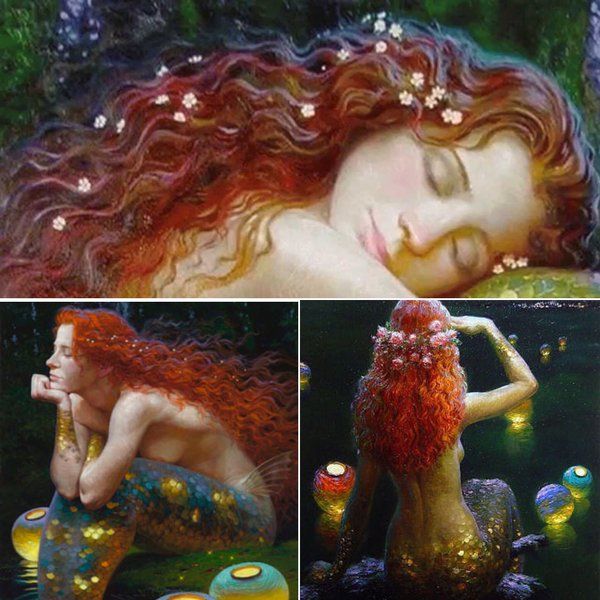 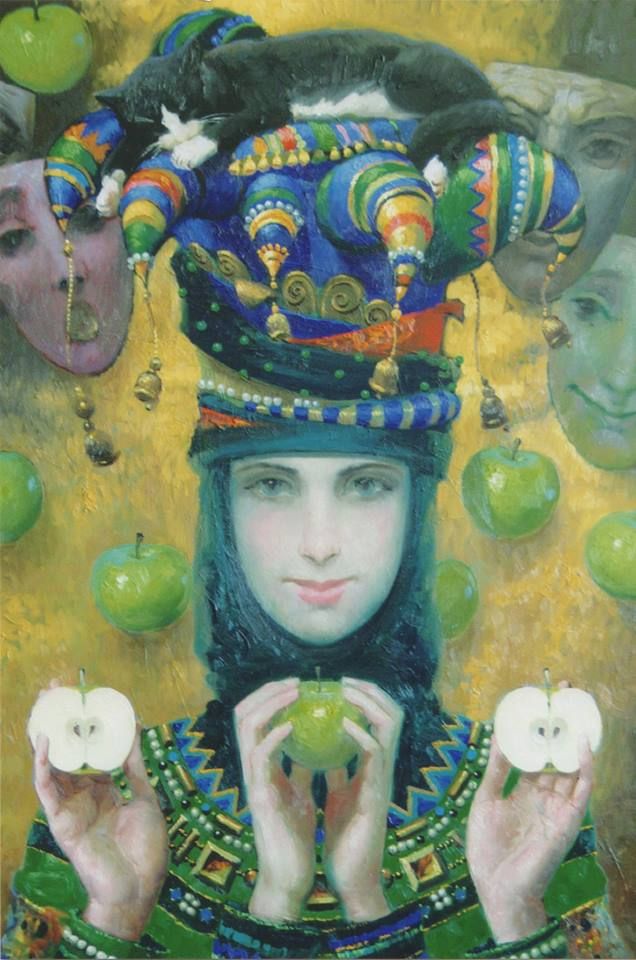 With a New Year right on the horizon, we hope to conjure up the luckiest, healthiest, most prosperous one ever!  Fortunately, there are plenty of practices and traditions that can help us along the way. If you’d like to know more about the weird stuff people all over the world do to help ring in the new year, read on!

Want to ensure yourself financial freedom in 2019? Try eating some pickled herring at midnight on New Year’s Eve. This practice comes from Poland, Germany and Scandinavia. It is believed that the silver color of the fish, representing real silver, will help you acquire money.

Speaking of silver, another Slavic tradition holds that if you wash your hands with a piece of silver on New Year’s Day, you will be prosperous for the year to come. You can also fill the sink with coins and water, then wash your face with the coin saturated mix.

In Romania, it was believed that the object you have in your hand when the clock strikes midnight will indicate the most important plan of your life in the coming year.  Following this line of thinking, if you have money in your hand, you should be prosperous. If you are holding your loved one’s hand, the new year will see you happy in personal relationships. If you are toasting with a glass in your hand, your cup runneth over – it will be an all around joyful year.  If you are eating something yummy, you will never go hungry. This tradition should allow a lot of room for creativity — so pick something that is important to you personally — and grab it before midnight 🙂

The Romanians also believed that a wish you make at the stroke of midnight will most likely come true!

From the American South comes another food tradition — Hoppin’ John.  Originating from French, Caribbean and African influences, Hoppin’ John is a stew made with pork, black eyed peas and greens, said to bring good luck and prosperity. 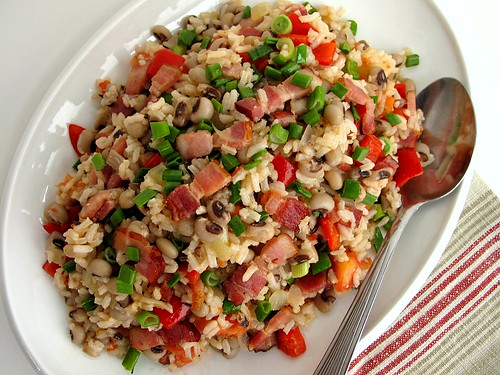 Why is it called “Hoppin’ John”?  It is said this stew is so good that children, when being served, can’t sit still in their seats, and John “comes hopping” when his wife cooks it.  For a great Hoppin’ John recipe click HERE.

If you don’t have time to prepare the entire stew, at least take in some green food on New Year’s Day. Spinach, collard greens, kale, or green peas will do. All of them are said to represent money and ensure prosperity.

But New Year’s Eve is not all fun and games. There are many superstitions regarding bad luck as well.

On New Year’s Day, make sure nothing leaves your house. This means NOTHING, not even garbage. Putting things out of the house is indicative of rejecting possessions, so if you throw things out, you just may lose something dear to you.

It is bad luck to hang a new calendar on the wall before the new year actually begins, so wait until Jan 1st to hang your calendar.

Also to be avoided – washing clothes and washing hair. It is believed you will ‘wash out’ important things or people in your life. I once heard a story about someone who did laundry on New Years Day and had a loved one die shortly after, so take heed!

It is definitely bad luck to take your Christmas tree down before January 6th, Feast of the Epiphany.  (During this time, our ancestors were practicing the Twelve Days of Christmas — receiving partridges in a pear tree and so forth…) So leave that tree up! On New Year’s Eve, take all the gold, silver and gemstones you own, and place them under the tree. Leave them there until January 2nd. This presentation of precious metals and jewels will ensure that you will be gifted and prosperous in the year to come.

Be careful about whom you invite into your home on New Year’s Day!  In Scotland, it was believed that the first person to cross your threshold after the stroke of midnight should definitely be a tall dark handsome man.  Blondes, redheads and women were considered bad luck.  Yes, it sounds biased…  However, this belief originated in Medieval times, when Scotland was susceptible to Viking invasions. The last ones they wanted showing up on their doorsteps were blonde Scandinavian savages, armed with blades and shields. 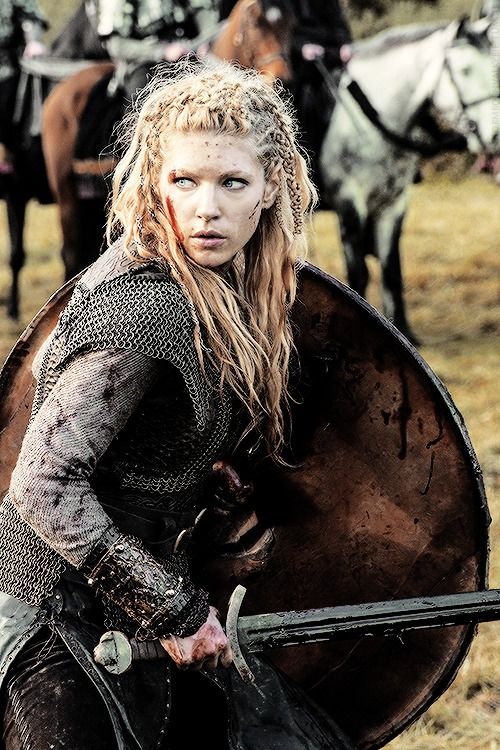 To make things even luckier, the Scots also hold that the dark haired man ought to bring coal, salt, shortbread and whiskey – all essential elements for prosperity.

Romania, too, believed that a woman should not be your first guest on New Year’s Day. Women were considered bad luck, but men ensured good fortune. (This probably originates from back when women were expected to have a dowry in order to be wed — and men collected the dowry.) So, invite the guys over!

In Brazil,  it is traditional to throw white flowers in the ocean. These are considered an offering to the water goddess Yemoja, who is said to control the seas. Offering her flowers will ensure her blessings for the coming year. If you are looking to have a baby in 2019, Italians hold that wearing red underwear on New Year’s Eve will help. This is because the color red is a symbol of fertility. Not to mention, a pretty and sexy color too. So bring on the Victoria’s Secrets!

The Greeks have an interesting custom involving pomegranates. The pomegranate symbolizes fertility, life, and abundance. Just after midnight on New Year’s Eve, it is customary for Greeks to smash a pomegranate against the door of their house — and it is said that the number of pomegranate seeds that end up scattered is directly correlated with the amount of good luck to come.

I have heard of a custom similar to this, but the pomegranates can be scooped into your mouth, and the seeds spit out. Count your future blessings by the number of seeds you do not swallow!

Speaking of swallowing, the Russians have an unusual custom. Folks write their wishes down on a piece of paper, burn them with a candle, and drink the subsequent ashes in a glass of champagne. (Sorry Russia, this one doesn’t sound safe to me!)

Many Pagan traditions hold the custom of writing your desires on paper, burning them in a cauldron, then scattering them to the wind – thus putting all your desires out to the universe. Doing it right after the stroke of midnight is considered extremely powerful.

In Chile, necromancy takes center stage.  New Year’s Eve and New Year’s Day Masses are held, not in churches, but in cemeteries. It is believed that this custom literally invites the spirits of the dead to join their families in festivities.

You may have tried kissing under the mistletoe, but in Ireland they take it one step further. It is customary for single women to sleep with a mistletoe under their pillow on New Year’s Eve. The magical mistletoe will cause them to dream of, and then find, their future husbands.

In my home town of Chicago, we have our own little tradition, called “The Polar Bear Plunge”. This is organized officially by the Chicago Polar Bear Club. Each New Year’s Day, they put on bathing suits and jump in Lake Michigan. Yes, our weather here is c-c-c-cold, and this tradition is c-c-c-crazy. However, Polar Bear Plungers do it for a good reason. Each swimmer recruits sponsors to pay him/ her money for this bravery, and then the money is given to people in need. Since its initial plunge in 2001, the Club has raised over $270,000!

Whatever you do this New Year’s Eve, have a safe, loving and healthy celebration!

Hard to believe it has been thirty-three years since Bono & company penned this song for their 1983 album ‘War’.  Although it was originally written for Lech Walesa and the Polish Solidarity movement, I find a lot of relevance in this song as applied to the issues of today.

I have always loved U2.  Once upon a time several years ago I was lucky enough to meet Bono and The Edge at a loading dock in Chicago. They struck me as kind and considerate gentlemen.

Hope you are having a fantastic New Year’s Day!

January 6th is a holiday that marks the end of the twelve days of Christmas. It is also known in the Christian church as Feast of the Three Kings, Feast of the Magi, or Epiphany.  This is the day when it was believed  the three wise men arrived in Bethlehem  to give gifts to the Christ child, thus beginning a tradition of gift giving at Christmas. Seems pretty sacred and special, right?

Well, our medieval counterparts  did not have much reverence about it.   In Medieval and Tudor England, Twelfth Night was a night for the biggest, wildest party EVER!  Everything was reversed on Twelfth Night.  Traditions and formalities went out the window.  Craziness and frivolity were acceptable behavior.  The Lord of Misrule came to rule.

Servants became masters and masters became servants.  Kings became peasants and peasants became kings.   Everything was put into a chaotic frenzy, accompanied by much drinking, dancing and general goofiness.  Sounds like a good time, eh?  It reminds me of what modern day folk do on New Year’s Eve, which just goes to show, we are never far from our ancestors.

He knew this time of revelry could and should  be celebrated with plays!   He went to work on an awesome comedy called ‘Twelfth Night’.   END_OF_DOCUMENT_TOKEN_TO_BE_REPLACED