I saw the best minds of my generation destroyed by madness 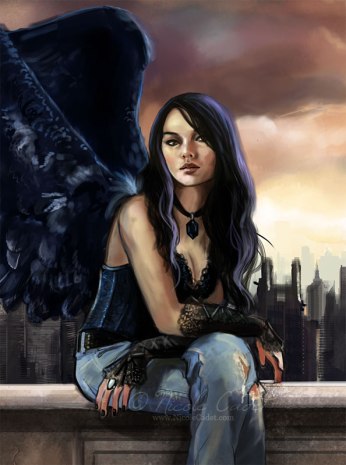 starving hysterical naked, dragging themselves through the negro streets at dawn looking for an angry fix,

angelheaded hipsters burning for the ancient heavenly connection to the starry dynamo in the machinery of night,

who poverty and tatters and hollow-eyed and high sat up smoking in the supernatural darkness of cold-water flats floating across the tops of cities contemplating jazz,

who bared their brains to Heaven under the El and saw Mohammedan angels staggering on tenement roofs illuminated,

who passed through universities with radiant eyes hallucinating Arkansas and Blake-light tragedy among the scholars of war,

who were expelled from the academies for crazy & publishing obscene odes on the windows of the skull,

who cowered in unshaven rooms in underwear, burning their money in wastebaskets and listening to the Terror through the wall,

who got busted in their pubic beards returning through Laredo with a belt of marijuana for New York,

who ate fire in paint hotels or drank turpentine in Paradise Alley, death, or purgatoried their torsos night after night

with dreams, with drugs, with waking nightmares, alcohol and cock and endless balls,

incomparable blind streets of shuddering cloud and lightning in the mind leaping towards poles of Canada & Paterson, illuminating all the motionless world of Time between,

ABOUT GINSBERG and HOWL:   Allen Ginsberg (1926-1997)  was a Beat Generation icon who hung out with his pals Jack Kerouac, Neal Cassady and William Burroughs – jazz grooving, social misfits who often went On The Road as they tried to  piece life together in the shattered aftermath of  WWII.  They felt, in fact, ‘beat’.

Ginsberg’s poem Howl drew a lot of attention when, in 1957, US officials decided it was obscene, illegal, and could not be printed nor distributed in this country. (You saw that line about cock and endless balls, right?)

Keep in mind, the US was a very uptight place back then.  They basically tolerated nothing. Homosexuality was considered a mental illness. Drug abuse was unheard of, or at least unmentionable in the polite circles of 1950’s Americana.  ‘Leave it To Beaver’ was  considered the ideal of family life.  (Funny, eh?  Leave it to Beaver?  Could have been a very empowering statement of female sexuality 🙂 But I digress.)

Ironically, Ginsberg himself was out of the country at the time his poem went under scrutiny.  He never suffered backlash for the obscenity charges, but Lawrence Ferlinghetti, owner of City Lights book store in San Francisco, was arrested and stood trial.  Amazingly, Ferlinghetti won!   Viva la free press!    California Judge Clayton Horn decided that the poem was not obscene, and it was, in fact of  “redeeming social importance”.  Well now 🙂

I am not including the entire poem because it goes on for like 30 pages.  Read the whole thing here: http://www.wussu.com/poems/agh.htm

I love the ending lines!   Allegedly they are addressed to one Carl Solomon, a friend of Ginsberg’s whom he met while receiving electric shock treatment in a mental institution.

I’m with you in Rockland 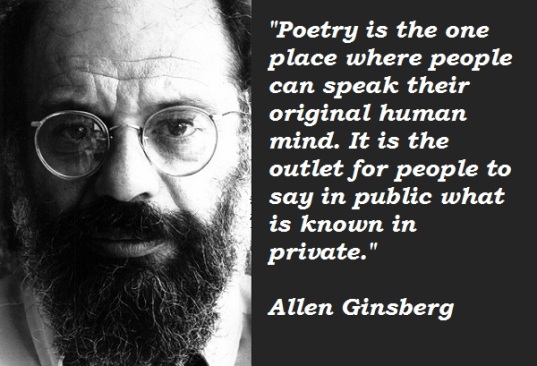