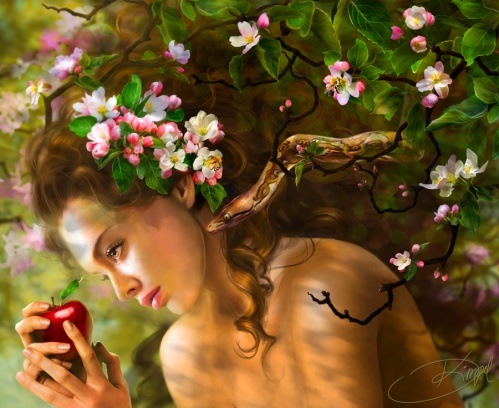 “Don’t you dare eat the fruit of that tree,” my husband Adam commanded me. “It is forbidden.”  Oh, but the apples looked so delicious!  Scarlet and gold, so ripe they practically fell off the branches. My mouth watered at the very sight of them.

Before then I had known only one way of life.  Speak when spoken to.  Answer to my husband, attend  his every need and (worst of all!)  listen with feigned amusement to his dull jokes and long winded stories.  I had no ideas, no discourse, no opinions of my own. My husband insisted  this must be so, for I — lowly creature that I was —  had been created from a rib.  A rib!  Bone-cold and useless, pulled from Adam’s very belly.  I had no sensibilities, no sensitivities, no reasoning powers of my own.

“Eve,” Adam told me, “your brain is pulp.” He picked an apple from the tree, sliced it in half with his carving knife. “Your mind is no better than these seeds.” He dug his fingers in the crevasses of the fruit, picked out the brown seeds, and, in disgust, flicked them like bugs off his fingers.  He then smashed the apple in the palm of his hand and flung it far across the garden where it fell among the droppings of my pet unicorns and pterodactyls. “Go to bed  now Eve,” he ordered me, finality in his voice.

But sleep would not come on a night such as this!  The black sky twinkled with stars and the moon shone bright as a silver jewel.  I wandered back to the orchard, grass wet against my bare feet.

They will tell you it was a snake that tempted me.  A snake!  Do you know any woman in her right mind who would get within a stone’s throw of a boa constrictor?

Oh no.  My tempter was a man, full fleshed and handsome, with a body rippled as the waves on the sea and a voice full of velvet and earth.

He never promised me knowledge. He never actually promised me anything.  He only made one claim. “You, Eve,” he said, “shall be the mother of all humanity.”

He reached a long arm in the darkness and picked an apple from the tree.  With perfect white teeth  he bit into it,  twirling the fruit on his tongue.  I watched as he swallowed, the bulge in his throat bobbing. 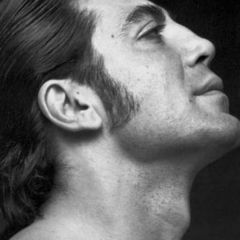 He licked his lips, brushed juice from his mouth with the back of his hand then studied me with wide lustful eyes.  Never, in the history of all the world, has there been a gesture so tempting.

“This apple,” he said, “is of no consequence.” He threw the bare core in the grass.  “What you need you have always had.”  He moved closer, his breath hot against my neck.   “It is hidden here,” he whispered, gently tapping his  fingers to my temples. “Inside your mind. Therein lies all wisdom,  all intuition, all femaleness. You are  powerful as the ever-changing  moon.” He pointed to the sky and the moon illuminated his face in the darkness. “But you must learn to trust your own thoughts,” he added.

Trust my own thoughts?  Such a thing had never been suggested to me!  Not by Adam, not by the other one, he who had claimed to be my father.

They will tell you I was banished from that garden. Oh no! Not I. The truth is  I left of my own volition, for how could I stay?  That very night I rounded up my unicorns, whistled for my pterodactyls. Hand in hand with the apple man I exited. My birds spun in a feathery stream, their chirping sweet as the pipes of Pan. My unicorns glided behind me in a white trail.

The apple? I never bothered eating it. 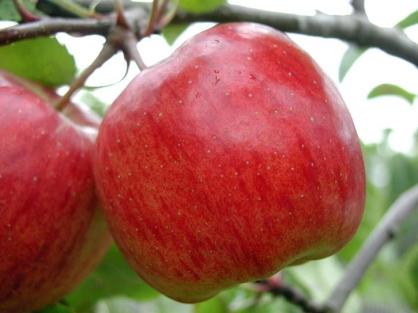 This story is in response to the Daily Prompt: Forbidden