This February, 2019, kicks off the tenth annual Women in Horror Month, a celebration of all things feminine and horrific. The two go together perfectly 🙂

Women in Horror Month is the brainchild of one Hannah Neurotica, creator of the Ax Wound website,  and winner of a Rondo Hatton Classic Horror Award. According to the website:

“Women in Horror Month (WiHM) is an international, grassroots initiative, which encourages supporters to learn about and showcase the underrepresented work of women in the horror industries. Whether they are on the screen, behind the scenes, or contributing in their other various artistic ways, it is clear that women love, appreciate, and contribute to the horror genre.”

Horror is traditionally male dominated — as it is thought men are naturally more “violent” than women. But au contraire!  A closer look reveals that women are the true mothers of invention when it comes to the sinister, the supernatural, the occult and the ominous.

Women are vessels of the blood, keepers of intuition, soldiers of psychic activity and warriors of witchery.  We are the breeders, the birthers, the shadow dwellers and the invisible observers.  Nothing gets past our perceptive eyes and so, in creating horror, women are the deft and delving masters!

Consider for a moment all that women have contributed. Without women, the macabre would be missing out on some of  its finest moments.

There would be no Frankenstein — creator Mary Shelley — who wondered  what it might be like to give birth to a monster. 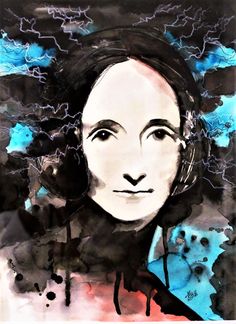 There would be no Mysteries of Udolpho.  This novel by Ann Radcliffe (arguably the ‘grandmother of Goth’) was first published in 1794. It is considered to be the prototype of Gothic romance, complete with sudden death, creepy castles, unprecedented misfortune, cruel strangers and forbidden love.

Jane Austen even used The Mysteries of Udolpho in her novel Northranger Abbey, to illustrate the idea of horror-loving women reading one too many Gothic novels and letting their imaginations take over their lives.

Let’s not forget vampires! Without women, there would be no Count Saint Germain (creator Chelsea Quinn Yarbro) no Dark Cathedral (creator Freda Warrington) and no Trueblood (creator Charlaine Harris.)

There would also be no infamous and notorious Vampire Lestat (creator Anne Rice.) Ms. Rice took it upon herself to explore these blood thirsty outsiders as they drifted through hundreds of years of history and struggled to survive. The result was The Vampire Chronicles, a compilation of over twenty  novels, delving into everything from ancient Egyptian deities to modern day rock stars. 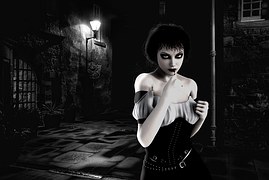 Bring on the haunted houses!  Without women, there would be no Hill House (creator Shirley Jackson.)  Shirley wanted to explore poltergeists and paranormal activity in an eerie mansion. The result was overnight guests, foreboding dread and one of the best ghost stories in 20th century literature.

Let’s not forget the heart stopping Agatha Christie mysteries, the dark moor encounters of Emily Bronte,  the real world creepiness of Daphne Du Maurier and Joyce Carol Oates. And of course, the horrific dystopia created by Margaret Atwood in A Handmaid’s Tale, where fertile women are kidnapped and then forced to serve as baby making ‘handmaids’ to the powers that be. If you have not yet seen it, check out the series on Hulu, starring Elizabeth Moss.

According to Atwood, everything in  A Handmaid’s Tale had occurred at some point in history, somewhere in the real world, so it was not as fantastical as most people think… 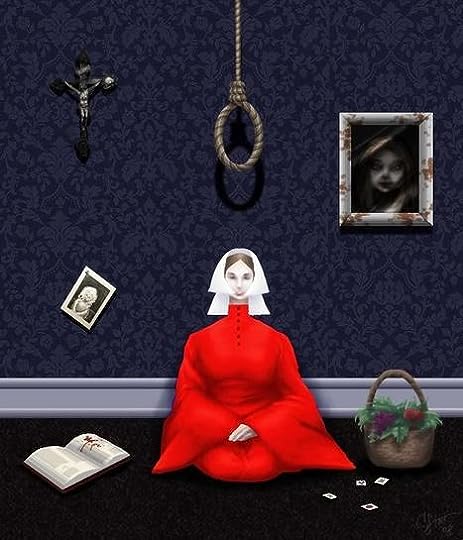 Without women in horror, there would also be no Hitchcock Blondes — the whipped cream cool females that broke under the pressure of psychopaths, thanks to the acting expertise of Tippi Hedron, Janet Leigh, Kim Novak and Grace Kelly, to name a few.

There would be no Birds (writer Daphne Du Maurier) no Creature From the Black Lagoon (costume design by Milicent Patrick) and of course, no Halloween franchise (thanks to co-writer Debra Hill and the incomparable Jamie Lee Curtis!)

On a lighter note, plenty of women have taken horror and combined it with comedy. Consider Elvia, Mistress of the Dark (Cassandra Peterson),  Lilly Munster (Yvonne De Carlo)  and the fabulous Morticia Addams (Carolyn Jones.)

Morticia served as the general matriarch to the iconic Addams Family, complete with “Lurch” the butler, “Thing” (a severed hand with a mind of its own) her Gothic children Pugsly and Wednesday, her husband Gomez, weird Uncle Fester and crone Grandmama. Morticia had her hands full but she ruled with a funeral parlor cool, far removed from the average sitcom. Who is your favorite woman in horror?

And finally, if you find yourself craving more tales of the terrible, please check out my very own horror stories in The Box Under The Bed and Dark Visions.  Here, you’ll find Jack the Ripper, scary fairies, Charon the death messenger and Lucifer himself 🙂