My husband Will was not inattentive to me, though this is what most folk assumed. True he lived in London and I saw him scarce, but when he arrived back to Stratford, O then! Much welcoming and merrymaking there was and I greeted him with open arms.

Will’s true home was the theater, his soul poured forth from his quill and ink pots. When I married him I knew this. How could I not?  He spoke in rhyme when he wooed me. The sonnet sprung from his lips, a stretch of beat and iamb, beautiful words and I trust not a woman in all of Stratford would have resisted young Master Shakespeare. He was tall and handsome, quick witted, dark eyed.  And I?  I was the original summer’s day, Venus to his Adonis.

When he moved to London it was with  that very poem he acquired patronage from the Earl of Southampton.  He had since compromised his words, winking to the the faire youth and dark lady.  Leave gossip for the tongue wagers.  I suspected he had lovers, both women and men.  Of course he did.  After all, his time in London was long. Yet the green monster of envy raised not its head.

One must understand. He was but a boy of eighteen when I married him, and I a woman of twenty six. And though I was with child, I knew his wild oats were not yet sown.  Faithfulness was never expected.  Therefore we lived in harmony.

But I!  Yes I.  Was the mother of his children, the keeper of his hearth. More importantly, not a word of his plays did he scribe, not a scroll did he bring to the King’s Men without my approval.  That was my gift, though none knew of it.

“Anne,” he said to me, “thou art my Juliet, my Beatrice, my Titania in all splendor of the fairies.” His meaning more specific, I was his muse.

Consider his play of Juliet. What a botched thing it was,  before I took my hand to it. “The lovers must commit suicide, Will,” quothe I. “Nothing less will do.”

“By poison of course. And a stabbing, the bloodier the better! In London they crave all means of violence, death, destruction and swordplay. You must give the public what they want, Billie Shakespeare! Else all is lost and the words for naught.”

The same was true of his characters Ophelia, Gertrude and Hamlet. My husband would have written it mildly, trippingly on the tongue as he liked to say. “O no Will,” I corrected. “There must be tragedy. Sweet Ophelia, tormented by madness, will drown herself in a river amongst the heavy flowers and willows that weep.”

“Another suicide?” He shook his head.

“Another, and many more. Trust me.”

Consider Macbeth.  A lame play until I corrected it, making Macbeth a milquetoast to a treacherous and evil woman! She was perhaps the most cunning of my creations.

“The Lady Macbeth must urge the man forward,” I insisted. “It is she who plots killing of King Duncan, she who will bloody her hands most.” His jaw hung and he turned a bit pale at this notion.

“She,” I continued, “will unsex herself, ruthless and scheming. She will drive herself to madness, never eliminating the the damned spots of blood that haunt her like Banquo’s ghost!”

He argued with me. “Surely, wife, the gentry will loathe such a vile woman.”

“They will love to hate her,” I assured him. For what better entertainment than an evil femme fatale and what better place to lay blame?

And so it was the box office flourished. “Sell admissions cheap, not more than a penny,” I advised him.

“But Anne,” quothe he, “Baron Hundson will not have it. The Globe itself will be closed should we not turn a profit.”

“You’ll turn a profit and you’ll turn it handsomely,” I insisted.  When the groundlings poured in, seatless in the mud and mire, but not lacking to pay their penny, Will saw that I was correct. I was always correct.

The money pots scattered and we quickly made a fortune. “To tell and sell a story,” I told him, “is the noblest of professions. None will tire of it, for they seek desperately to escape the boredom of their mundane lives.”

And so it was, back home in Stratford, by our fortune I acquired land and houses. New Place was mine, a brace of animals and horses, thriving farms and plenty of servants to do my bidding. When we accumulated enough wealth I urged Will to purchase a Coat of Arms. The motto ‘Not Without Right’ were my own words, because indeed we were not without rights to our own status of Gentle.

One day I waited for the clomp of horse hooves upon our pavement. ‘Twas the twenty third day of April, the day of his birth and Will returned home to celebrate. My cooks had prepared a great feast. There would be games and diversions. I smiled as I saw him ride up the road, clothed in boots and britches. He pulled a scribbled parchment from his doublet.

“What’s this?” I kissed him on both cheeks, then took the parchment.

“My latest,” he answered. “It is called Othello.”

“A marriage between a Moor and a Venetian. Their love will be the purest and they shall live happily ever after.”

I shook my head and tore the parchment to pieces.

“Their love,” I said defiantly, “shall be fraught with tension. The Moor black as jet and the Venetian white as pearl. She a young seductress, he a skilled soldier.   There will be coupling, the mounting of the beast with two backs, they insatiable in their lust!  There will be jealousy and betrayal, one named Cassio who will claim her…”

I narrowed my eyes, thinking of what would enhance this plot. “Add a handkerchief, the most intimate of objects.”

Will popped his eyes. “Surely not a handkerchief!”

“Yes, husband. And ‘twill end in a murder.  Othello driven to savage madness, kills his wife in her very own bed! Then he, driven to suicide, slays himself and falls next to her. Give the people blood and lust and lovers and yet more blood.”

“My dear, are you sure? Such a thing shall be most controversial.” He cocked his head.

“Trust me.” I answered. I then took his hand. “Let the birthday celebrations begin.”

That night we finished revisions. I predicted the story of the Moor named Othello and his wife Desdemona would be among the greatest of my husband’s many tragedies. I predicted the plays would last on into posterity, for hundred of years, maybe thousands, created anew by each generation, constantly revealing human truths, constantly entertaining each audience.

And I was always correct.

“She hath a way,  so to control

and rapture the imprisoned soul

and sweetest heaven on earth display

that to be heaven, Anne hath a way

She hath a way, Anne Hathaway,

“When logic and proportion

And the white knight is walking backwards

And the Red Queen’s lost her head

Remember what the dormouse said.”

Can we change history by traveling back in time?  This very interesting question is posed in the new movie Alice Through The Looking Glass.  At first glance you might think this is a kid’s film, but don’t be fooled; this is actually a quite complicated story that will most appeal to adults and fantasy/ sci fi fans.

A Steam-punk  Alice (Mia Wasikowska)  is captain of The Wonder, her deceased father’s ship, circa 1870.   After three years out at sea, Alice returns to her home town to find her life in shambles.  The evil Hamish  has taken over her father’s company. Her mother’s fortune is in jeopardy and  Alice must give her up her beloved ship, resign as captain and take a boring job as a desk clerk.

In a moment of confusion Alice retreats to the parlor and follows a butterfly through the mirror. She then lands in Underland where the real trouble begins.

Alice’s best friend the Mad Hatter (Johnny Depp)  has gone into a state of depression regarding his family and painful past incidents.   Alice is given a mission by the  White Queen (Anne Hathaway)  to travel back in time in order to change situations that have created grief —  not only for the Hatter, but for many other characters. People in general. You and me probably… 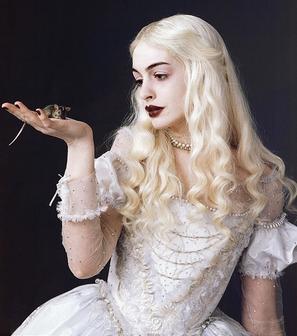 Everyone knows the Grandfather Theory regarding time travel. That is — if you travel back in time and kill your grandfather, you could never be born (because Grandpa wasn’t around to  sire your father, hence your father could not sire you.) Which would also mean you would not be there to time travel in the first place. Which would mean time travel is impossible.

Quantum physicists, however,  have recently made some new discoveries, and are now theorizing that there may actually be as many as eleven different dimensions, through some of which time travel would be possible. Your grandfather  is thus existing in a completely different dimension of space and time. Kill him in one dimension and he still is alive in another. Yes, kind of like Schrodinger’s cat. (This based upon Einstein’s theory and the Copenhagen Interpretation of quantum physics, suggesting that particles can exist in two separate states, depending upon a conditional variable and how it is observed.)

“Logic and proportion have fallen sloppy dead.”   Or have they?

Time incarnate  (Sasha Baron Cohen) is an actual person, or maybe a robot of sorts — like I said,  this is all very Steam-punkish.   He has some really cool supernatural blue  eyes.   See this movie in 3D for an awesome surreal experience!  Psychedelic gardens, a talking butterfly, weird-funky hats and variety of time pieces which determine one’s death. Plus a disappearing cat. (No coincidence there, Schrodinger.)

I am a HUGE fan of the original Alice in Wonderland  books. This movie, however, has absolutely nothing to do with the  books.  Do not expect a replica of Carroll’s tales.   What the writers have done is create a new, thought provoking story revolving around the original characters.

Lewis Carroll was a mathemetician. He was actually an Oxford professor of mathematics, interested in time travel, the subconscious mind, photography and mirror imagery, as well as storytelling and poetry.    Alice Through The Looking Glass keeps the magical sentiment of Carroll’s original books and also stays true to the provocative questions he had in mind when he wrote them. 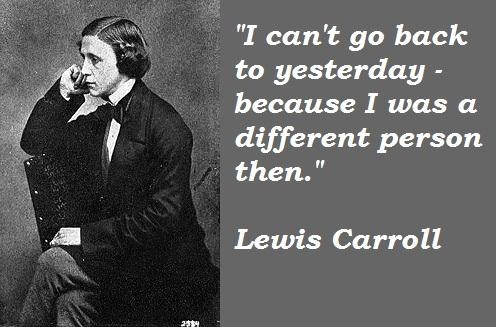 I absolutely LOVED this movie.  If you are a fan of fantasy, time travel, Steam-punk or sci fi I think you will like it too.  Oh yeah, and the voice of the butterfly iis the late great Alan Rickman in probably his last performance. Which is somehow poetically and metaphorically correct…

Here is a picture of the real Alice Liddell, inspiration for the books. When in doubt, go ask Alice, or perhaps go ask Lewis.  In any case, Feed Your Head  🙂