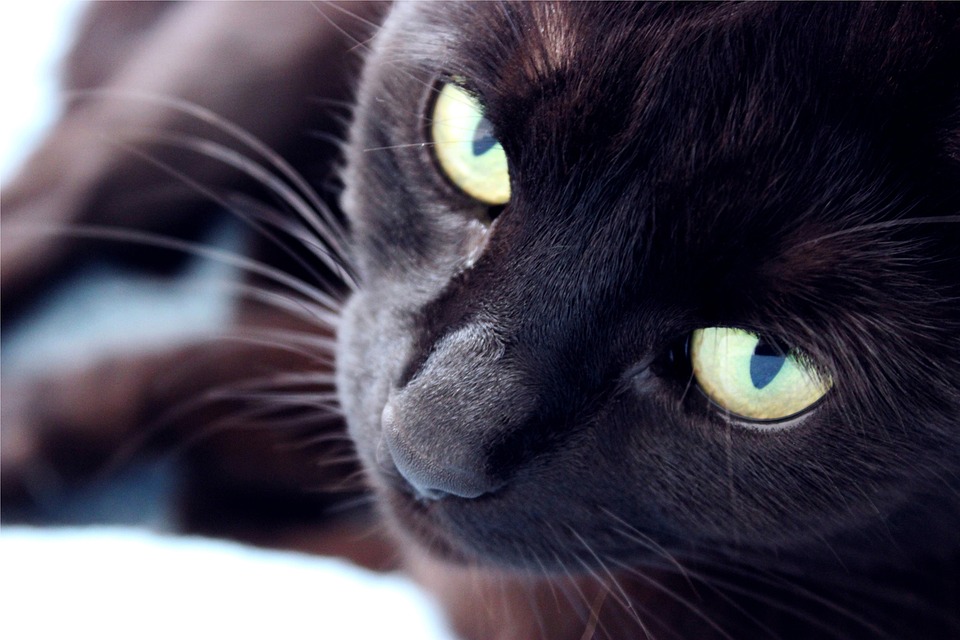 “This was a remarkably large and beautiful animal, entirely black, and sagacious to an astonishing degree.”
― Edgar Allan Poe, The Black Cat

Have you hugged your black cat today? If not, you should. Today, August 17, is National Black Cat Appreciation Day!

And why (you may ask) do we need an appreciation day for black cats?

Well, they deserve it!  Look at the bad rap they have gotten over the ages. Lots of superstition has grown around them and left a dent in the collective consciousness. Some people are afraid of them to this day. People may, for example, avoid getting in the way of a black cat, believing them to be bad luck if they cross your path.

Black cats, however, were not always considered bad. In fact, in some cultures they were quite revered.

The Ancient Egyptians loved and worshiped black cats. This love came from a belief that black cats were associated with the gods. The Egyptian goddess Bast was known as the “cat goddess” and used black cats as symbols to represent her. She was often depicted as a goddess with a human body and the head of a cat. 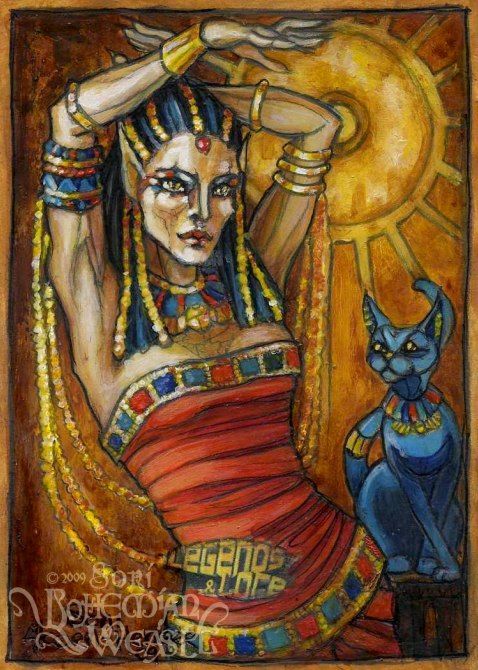 Early Egyptians also prized cats because of  their great ability to eliminate rats, mice, and other unhealthy pests.  Having a cat meant a cleaner house, cleaner food, and all around better health. The Egyptians took their love of black cats seriously.  Killing a black cat in Ancient Egypt was a capital offense and the murderer would be put to death! (Sounds like a good law to me. Maybe we should bring it back..)

Egyptians were obsessed with the afterlife, but they also believed their cats would come with them. When the Egyptian family cat died, he would be mummified and buried within the family tomb. The family would also take time to mourn his death.

Ah but this veneration of the black cat would not last! Egyptian civilization fell and so did the status of the beloved kitties. By the Middle Ages, our feline friends were acquiring their evil reputation. Many myths and legends contributed to this.

One story that circulated around Europe told of a black cat running into the house of a witch. According to this legend, a father and son were walking across the road when they noticed the cat. Apparently, the two were not animal lovers, because they began pelting stones at the cat. Scared and defenseless, the kitty ran into a house that — according to the local gossips — was the home of a woman who did spell casting.

I’d say the cat was pretty smart, running away from two attackers.

According to the legend, the next day the father and son encountered the woman who lived in the house, and she was limping. Thus it was assumed that the witch had shape shifted to a black cat and received an injury from the rocks that were thrown at her.

The story spread and the long association of black cats and witchcraft became ingrained in folklore. Black cats were believed to be witches in disguise, witches’ pets, or even demons sent by witches to spy on humans.

This folklore actually took on a legal ramifications when the Catholic Church took issue with cats! 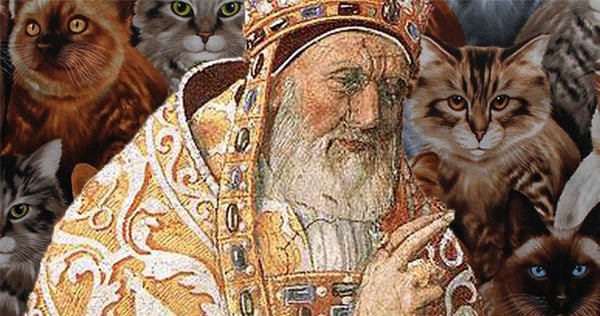 In 1233, Pope Gregory IX drew up a decree to condemn black cats as evil, satanic creatures. This led to a widespread extermination of black cats. They were killed in droves, drowned, burnt, fed poison and hung. A Plague Upon Their Houses

Exterminating black cats was a really dumb thing to do, as later realized, because cats were a major force in killing off diseased rats that brought in the Black Plague. The great outbreak of the Black Death in the 14th century may have been in part due to this mass extermination of back cats. The Pope would have done much better to just leave the kitties to their work of killing vermin!

Because they were considered to be witches’ familiars, black cats  were often burned at the stake or hung, along with an accused witch. This practice remained in effect between the 13th-17th centuries when witch hunts were rampant.

Luckily, as witches, women and animals earned more rights, these superstitions faded as well. Most witchcraft laws were repealed by the 20th century, and animal rights groups have come to the rescue of cats. To this day, black cats remain associated with Halloween, which can be a particular time of cruelty for them.  For this reason, many shelters prohibit the adoption of black cats in the month of October. (Please note, they are available all other months and make excellent pets!)

Black cats are known to be among the most affectionate and entertaining of felines. Besides that, there are plenty of good superstitions about black cats. 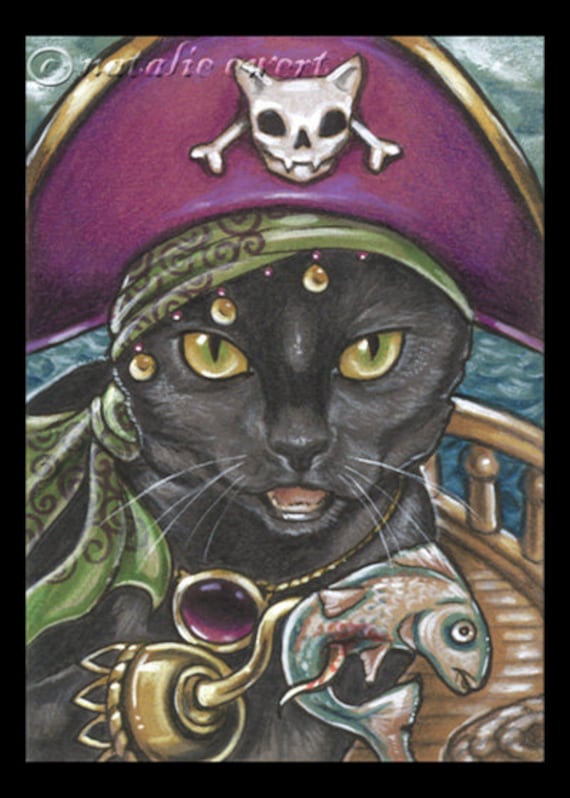 So, you see, these clever felines really do deserve a day all to themselves, to help their human friends realize how great they are.

Jasper says, “Have a lovely Black Cat Appreciation Day! And be kind to a black cat.”

When I was a kid, I used to love the Circus.  I admit it. I mean, it was so exciting!  All those great animals  performing tricks for our entertainment.  The Circus came to town every year, Ringling Brothers Barnum and Bailey. It was the greatest show on earth.  And who could resist that junk food? Candy apples were my favorite. I loved the three rings, the wide elephants, the smell of hay and peanuts. Plus there was the Freak Show, and I could definitely relate.

The Circus, to me, was a real treat.

When my nieces and nephew were little, I also took them to the Circus. Why not? This was FUN, a kid’s paradise. Truthfully I never gave it a second thought. Until one time we went to the Ringling Brothers Barnum and Bailey, and I noticed something disturbing.

The tigers came out in a parade. Oh, they were magnificent! Bengal giants with their coats of orange and black.. The tigers paraded in a line, then a circle. But something was peculiar. There was this one tiger. He would not go with the rest. He backed away, snarled, would not walk in the circle. I don’t remember the trainer being particularly cruel. Just that the animal was stubborn. I watched. The tiger clearly was NOT going to perform his stunts. He rumbled, backed up, growled, shook his head. This  big cat was definitely NOT okay.

I know enough about animals to know that if one does not want to do something, you should not force him. An animal can be coaxed, loved, persuaded, even bribed to do your bidding, but not forced.  The tiger was then taken out of the line and put somewhere. I don’t know where. It had to be a solitary confinement.  I remember saying, “That tiger is gonna blow.  Oh yeah, he is gonna explode!  Mark my words.”

I realized something was very wrong.  Then, all of a sudden, the whole Circus was wrong.  There were stunt people. I remember a woman who got locked up in a glass box, flexing and folding her limbs until she somehow perversely fit in this tiny cage that could not even hold a kitten.

There was another woman who twirled by her teeth on a rope. I remember her spinning around, long hair flailing. I worried about her neck snapping, her teeth becoming dislodged.

Grandma asked the nieces if they wanted dolls. There were these plastic dolls for sale, souvenirs that actually resembled the dangling tooth woman. The girls did not want them.  They looked at me with wide morose eyes. Yep, the kids knew better.   In that moment it all became creepy. Dear god.  Who ran this place?  Could it be?  The Circus was actually –  an institution of cruelty?   This was exploitation, blatant and unmitigated!   Why hadn’t I noticed before?   What the heck were we even DOING there?

Most revelations in my life have come like this – big flashes where all of a sudden I realize:

EVERYTHING I KNOW IS WRONG.

This was one of those moments.

That night on the News we heard a report that the Ringling Brother’s tiger escaped.  Not only did the animal blow his temper, but he apparently blew the entire pop stand as well 🙂 Goodbye PT.   He escaped your cages, busted out of your Alcatraz traveling show.

What happened to that tiger? I do not know.  Somehow I could not bring myself to learn the follow up.  He was, no doubt recaptured. Probably hit with a stun gun.  Personally I liked to picture him in the wilds of Africa, roaming the plains.  But I am sure that did not happen. Even I am not that naïve.

After that we boycotted Circuses entirely.

This post is in response to the Daily Prompt, pingback: