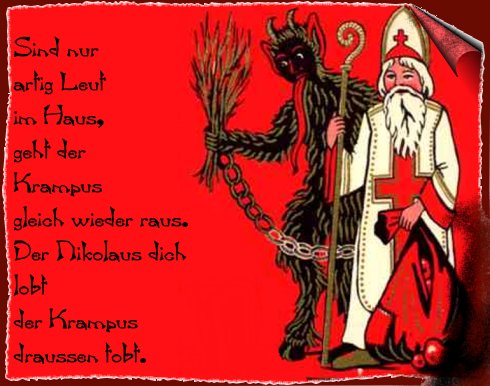 KRAMPUS:  Oh, it was easy enough for Saint Nicholas! His job was to coddle them. He gave them sweets and toys, praised them on how good they were, filled their stockings with candy and marzipan. When a child is docile it is simple enough to reward that child with some shiny, useless thing!  But the rebels, the transgressors, the nay-sayers, what of them? Oh yes they are much harder to deal with!  It was I, Krampus, who was given that difficult job.  You see, I was deemed the disciplinarian, whereas Nicholas was the jovial gift giver.

My position was not enviable in the least. Obedient children are simple. They rise when told, sleep when told. Perform their chores and tasks as expected. But the bad ones.  Ah, the bad ones!  It is they that must be punished, and that punishment is most necessary if ever they are to achieve their true potential.

And so it was upon the eve of the saint’s feast, the 5th of December, 1877 that I took to the humble Kabacki Forest near Warsaw Poland in the Russian Partition. It was there that dwelt a poor family of seven who were much in need of my services.  All of the children were quite obedient, save for one; the youngest. She was called Mania (as in maniac) though her true given name was Marie.

Mania had a fine but scattered mind when she first came under my switch. Yes, yes, I took a birch stick to them!  What of it? Spare the rod, spoil the child. Have you not read your Good Book?

Seldom do folk take the time to consider the anguish I felt!  For what sane being would take pleasure in the injuring of a child? Still. They needed it.

MANIA:   I first encountered Krampus in the forest of Kabacki on the eve of the Feast of Saint Nicholas.  I was but ten years old and my mother had sent me, along with my sister Zosia and my brother Joseph to fetch kindle wood for the fire.

The night was black, the waxing moon only a yellow arch in the sky. A deep snow had just fallen and my boots crunched on the path. When we came upon a small tree suitable for chopping Joseph took his ax while Zosia and I tied its base. It was there in the shadows I first saw him; a man with a goat’s legs, hooves and a long thudding tail that swished back and forth.  From his head sprouted two twisted horns. I was a child of great imagination, and so, in all honesty, such a being seemed entirely credible to me. My brother and sister, however, were not so open minded.  Joseph stopped his ax in mid air, frozen in a mixture of fear and disbelief.

Krampus approached slowly, stealthily. Had the adults been with us, I suppose their first instinct would have been to kill him, for all manner of dangerous beasts are known to lurk in the forest. But he was no ordinary beast.

“Lay down your ax, boy. I mean no harm,” Krampus said in a voice that was husky but not  unkind. “It is your sister that interests me most.”

Zosia shuddered as the goat man approached closer.  She put her hands over her eyes and began to weep.  The sight of him, I’ll admit, was quite gruesome, for his body was hairy and he stood a good eight feet tall. As for myself, I was intrigued. I had always been a curious child, and somehow, in my heart of hearts, I was certain that the world I lived in,  as it had been presented to me, was not whole.  Therefore, I was delighted when Krampus turned to Zosia and spoke again. “Not you, precious girl,” he reassured her. “It is Mania I must address on this night.” He then placed a furry hand upon my shoulder. “Come with me,” he ordered.

I followed him through the woods, all the while keeping my eyes upon his twitching tail. In his hand he carried a birch stick, and I knew what was coming. I had been a bad girl.  A defiant, disobedient child. I spent far too much time with my nose in books and I often neglected my chores. Why, just that very night my mother had to pry me away from my science books in order to get me to chop the wood!  I was lazy and hopeless, never doing my part to help the family. Now I would pay for my despicable behavior!

Krampus lead me to the edge of a babbling brook, one that had not yet frozen over in December’s cold. The water churned, silver blue and fast moving.

The goat man stood at the bank gripping his birch stick. “Bend over, Mania ,” he commanded.

I stood close to him, determined I would not show fear or vulnerability. I would TAKE my punishment. I’d take it like a woman! I closed my eyes, turned my back to him, bent over and braced  for my beating.

A full minute passed. Then another.

Impatient as I was, I turned around, squinted at Krampus through my half closed eyes. He stood tall and straight, his body black against the already black night. He grinned and his white teeth gleamed in the darkness. He then began to laugh a hearty chuckle that rang through the forest.

I keeled around and stomped my foot in the snow. “What is the meaning of this?” I demanded. “Are you not to beat me? You, the great and powerful Krampus who punishes all bad children? Am I not a bad child? What delays you?”

It is an odd thing.  Sometimes one can be so ready and accustomed to defeat that when the defeat does NOT come we are angry, taken aback.

Krampus dropped his switch to the ground. “Mania ,” he said, “you have no need for this switch. You have proven yourself curious and dedicated enough to follow me to this brook. I shall not injure you, but I will show you something marvelous, something sacred.”

It was then that the goat man reached his hairy hand to the stream. He retrieved a cupful  of water which he poured into a glass jar. He held it to the sky, tiny ripples reflecting the sparse moonlight.

“In this water,” he stated, “you will see your future.”

I stared in the glass. The water separated into balls and spheres, swirling, vibrating particles of light and color. They spun round and round, droplets jumping, some emitting light as bright as flickering candles.

“What is it?” I asked, but Krampus only smiled.

He then shook the jar again and this time I saw a picture. The jar became  a snow globe and inside was a domed building. Snow swirled over its high spire and arched windows. In a nearby courtyard men in cloaks passed, clutching books, engaged in conversation. It was, to be sure, a place of learning. But why present this to me?

“Sorbonne,” Krampus said. “The University of Paris. You  will study there, if you are disciplined enough.”

The Sorbonne? But it was beyond my wildest dreams!

Krampus shook the jar again. This time inside the glass there appeared a collection of gold letters. They floated, surfaced and formed a strange name which made no sense to me: Polonium.

“What is the meaning of this?” I asked, but Krampus only grinned and poured the water back into the brook.

“Polonium,” he said finally. “Named for your native Poland, which will never be far from your heart.”

Krampus was a frustrating and nonsensical old goat!

“Go back now Mania,” he ordered. “Your siblings await you. Remember, keep steadfast to your studies. This world will be unkind to you, and your life will not be easy, for you are a female competing in the scientific realm of men. However, you must never let this deter you!”

With that he kissed my forehead, chucked my chin and waved a hand to motion me away.  He then jumped into the brook. He bobbed up and down, grinning the whole time, before he began to sink.  I watched as his twisted horns vanished beneath the water.

I ran back through the forest to where a dumbfounded Zosia and suspicious Joseph awaited me at the standing tree.  I never told them what had transpired.

KRAMPUS:  Mania Skłodowska was perhaps my best prodigy. She did indeed go on to study at the Sorbonne and even became the first ever female professor at the University of Paris.  Her chemical research led to the discovery of – yes, you guessed it — polonium. Her revelations in radioactivity shook the very foundations of physics itself. She was the first woman to ever win a Nobel Prize, though she gave away the money she acquired from it. Even Mr. Einstein himself said of her,  “She was a person who could not be corrupted by fame.”

Needless to say, I was most proud of my Mania.  And to think I never even once used my switch upon her!

She married a man named Curie and was ever known to the world as Marie. 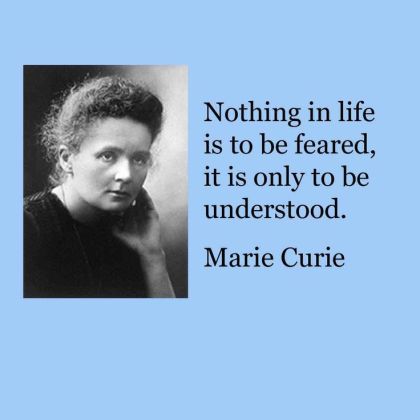 ** This story was inspired by my friend Vicky.  Check out her post Scary Xmas for more about Krampus and an EXCELLENT Krampus Night recipe!